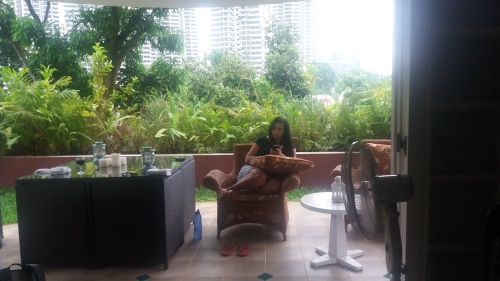 I was feeling a bit emotional as I was sad to be leaving my new friends. All of Team Tortoise and some others came to see me off and Amanda and I were holding back the tears as we said goodbye. As the taxi drove out of the hotel gates I looked out of the back window and they were all standing there waving and that set me off. I find with these things you’ve just got to let them out, and after a while I felt a bit better. The trek had been an amazing experience – one I never thought I’d get to do, let alone complete and at the same time enjoy it! I didn’t think I’d meet such great people and I have no doubt that I will stay in touch with many of them.

It was going to be a long day as I had a stop in Kuala Lumpa and the flight out of Kathmandu was delayed. Of course, flights are always delayed in Kathmandu so that was par for the course … By the time I got to KL it was evening and the flight to Singapore was delayed by an hour, therefore it was about 1am local time by the time I landed. I got a taxi from the airport to my cousin’s house, the driver was very friendly and chatty and before I knew it we had arrived.

I felt awful arriving so late – it was now 2am – but Maria and her husband Christophe (from Belgium) sat up with me for a while chatting and I got to pet their adorable Labrador Freddy. They have a lovely ground floor apartment, with a garden, in a detached town house in a quiet part of the city and after the craziness of Kathmandu it was very calming. I settled down on the sofa to sleep and looked forward to the next few days catching up with family news and not doing very much!

After a nice lay-in we got up and Maria and I sat outside and relaxed. Too late even for brunch, we went straight to lunch – Christophe making a wonderful roast dinner (roast chicken legs, roast potatoes, peas and bacon with a mushroom sauce, and gravy). Yum! It was so good to have a home-cooked meal and I really enjoyed it. The afternoon saw us relaxing again, I watched a film and we had a snack for tea and then bed fairly early as two of Christophe’s Belgium friends were arriving in the morning.

Slept in late-ish again and then Christophe came bustling in, tidying up and getting things ready for his friends – Evelyne and Peter. They duly arrived and we sat eating croissants for breakfast, hearing all their travel stories. They had been on honeymoon for the last few months, travelling mostly around Asia I think, and were now on their way back to Belgium to start their married lives. Maria and I left them chatting and popped out to get some supplies and have a little mooch around the shops.

Lunch was a simple affair of cheese and salami and we hung out all afternoon chilling. Evelyne had been on The Voice (Belgium) and treated us to some songs, accompanied by Maria on the piano – she had a great voice. There was more of Christophe’s home cooking for dinner, this time a BBQ, and we watched old British comedy series such as Little Britain and The Fast Show on TV until everyone started yawning.