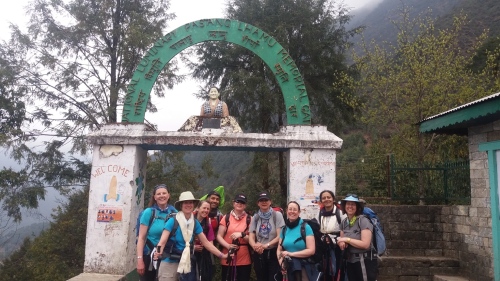 It was a warm and sunny morning and Team Tortoise had been going for two and a half hours and had reached Monjo, which was the whole walk of the second day of the trek (in reverse, see #33)! We were very encouraged by this and hoped we would soon be in Phakding, our lunch stop. However, Phakding was in fact a really long way away and we were literally on our last legs by the time we reached the lodge and collapsed at the dinner table.

The lodge was really nice and owned by a Sherpa who had taken part on previous Xtreme Everest treks. It was at this point that we said a sad goodbye to Sherpa Gite. Amanda and I had a lovely picture taken with him; I will never forget treading in his footsteps following his infamous ‘Sherpa Shuffle’ as he faithfully got us up and down the mountain.

In dread of being given yet another plate of spaghetti I was happy to receive chow mien (with the obligatory potatoes) for lunch and afterwards felt a lot more revived. As we had got lower the trees appeared in abundance and the lovely smell of pine and flowers made the going pleasant. The snow had gone and while I still had my cold and chest infection (today was my last day of antibiotics and yesterday was my last day of diamox), my nose had stopped running.

I don’t know if it was the lower altitude or the knowledge that we only had a few kilometres to go but suddenly I had lots of energy and the afternoon saw me striding out in front of the group, eager to reach the finish line. Everyone else was quite tired and one girl in particular was really suffering, so Amanda put on some music on her mobile and she and I danced and sang to an Abba song to encourage everyone up the last hill and suddenly, 9 hours after starting our walk, we found ourselves in Lukla.

At the Paradise Lodge Amanda and I were lucky to have an outside room, with no neighbours, and not only did we have an en-suite with a western flushing toilet and a sink that dispatched (cold) running water, it was big enough to fit three beds! We were deliriously happy and marvelled at the fact that if we had been shown this room in the UK, for example, we would have been very disappointed but after the deprivation on the trek it seemed the height of luxury; paradise indeed.

Dinner was Smash (yes, potato smash!), fried chicken, veg, salad and the dreaded spaghetti. As the trek was finished I was very happy to pass on the spaghetti and Amanda and I shared a celebratory beer. Following cake, we had a touching ceremony where the trek leaders handed out medals to each of us, including the Sherpas and Porters. It was hard to believe that we had started and completed the trek, it only seemed a short while ago that we had set off from the Paradise Lodge with the whole journey in front of us. We felt like a big family, having experienced the highs, helped each other through the lows and achieved our goals together.

The A team was once again spared the early morning flight, so a few of us stayed up a while with the Sherpas and had a party of sorts before heading to bed with a smile on our faces.