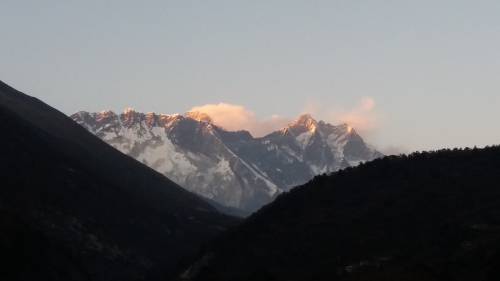 The first part of the walk wasn’t too taxing, with lovely views of Everest as the weather was still warm and sunny – I might run out of sun cream at this rate! We got to the lunch stop by about 11.30am and sat down to wait for the others, who came in dribs and drabs.

Today we had a cheese toastie, along with the usual potatoes and veg. While I was not expecting this kind of food I was actually quite thankful for it as it was easy to eat. After lunch we had to face our second big hill (Namche being the first). As time had gone on we had settled into small groups of people, within our actual trek group, we liked to walk with. The groups weren’t really based on personality as such, it was more about who walked at your speed. Amanda and I were generally in the same group and a Sherpa called Gite (I don’t think that’s how you spell it but it’s pronounced the French way with a J sound as opposed to G) had adopted us. He walked at the perfect pace and so the three of us plus Richard, one of the eldest but one of the more experienced people on the trek, started on the hill. We only stopped for two water breaks and were hardly out of breath when we got to the top a few hours later.

It’s quite amusing and sometimes frustrating dealing with some other groups on the trail. On this day there was a small group of Italians and we played tag all the way up the hill. They kept pushing past us at a rate of knots, now bearing in mind that the trail is 1) steep 2) uneven 3) tight in places where you have to go single file 4) and dusty, this is very annoying because you have to pull over to let them pass and then breath in all the dust they kick up. As they were going too quickly they got tired and had to stop to rest, at which point we caught them up and overtook. They then started off again and the cycle repeated itself. I don’t think they got up the hill any quicker than us, going at our steady pace, and I’m sure we felt a lot better than they did when we got to the top!

At the top was a place called Tengboche, a lovely village with a monastery, a few lodges and a fab bakery. As a reward for getting up the hill I bought slices of cake for the four of us and Amanda bought the drinks; I had lemon meringue pie, which was to die for, and a hot chocolate. The cost of the cake slices was almost £20! But they were worth every penny. We decided to stay for the prayers in the monastery at 3pm and then walked down the hill to our Lodge called ‘Rivendale’, named after the elvish valley from Lord of the Rings as it lies hidden between two mountains with a river running through it. The trip down from Tengboche was really pretty as we walked through a forest of birch trees and rhododendrons. The actual Lodge was lovely as well, with fantastic views of Everest – from the window of our room, and I got some great shots of Everest at sunset (see cover photo).

When we got there I wasn’t feeling great, my heart was racing and I had a bit of a headache. I am intolerant to caffeine, hence my bush tea, and since starting the trek I’ve not eaten chocolate (which contains caffeine) plus by then I had a cold. Our trek leader Kay came to see me in my room and as my sats were ok said to take some paracetamol and see how I was later.

I had a bit of a rest and felt better by dinner time, where we got up to date on another drama. As we were walking in the afternoon we had seen one of our trek-mates Becky at the side of the path with someone from another group. She had her medical kit out so we walked past so as not to be nosey. It turned out that she had come across this man and immediately saw that there was something wrong with him, after examining him she realised he had a high-altitude pulmonary edema (HAPE). His group were all standing around, I don’t think they had any medics with them and they hadn’t a clue that he needed immediate medical attention. Luckily she had the right drugs in her kit and I believe that Chris Imray walked past after us and also gave assistance. The upshot was that he had to be airlifted off the mountain in a helicopter! I have no doubt that without Becky’s intervention the condition probably would have proved fatal (he made a full recovery once at a lower altitude). As she and her boyfriend Brad had waited a few hours with this man the helicopter pilot gave them a lift to Deboche so they didn’t have to walk up the hill. How nice of him and how exciting for them!

That incident brought home to me that I am in a dangerous place and I have to take care of myself and say if I don’t feel well. Of course there was a very slim chance of getting HAPE or HACE on our trek as Jagged Globe are a very experienced trekking company, and our ascent profile is tried and tested and we are given plenty of time at the right places to acclimatise. It was a slightly scary end to the day, however I feel safe in the knowledge that I’m with the best people and they are looking out for me. Onwards and upwards!