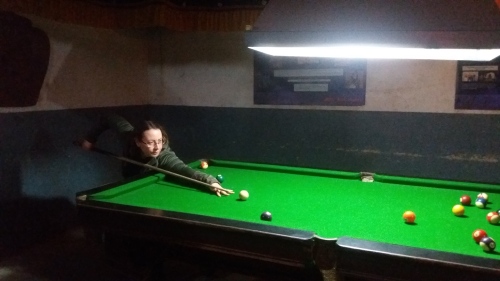 Having had a better night’s sleep, Amanda and I opted to stay in bed while some got up early to go and see Everest at sunrise. I guess we could have got up, we were certainly awake as the Lodges are not quiet places. On the outside they look solid, being made of brick/stone, but on the inside everything is made from plywood – the floors, ceilings and the partitions between rooms. You can hear everyone clomping around in their boots, people snoring, and in one place I could hear the rustle of the sleeping bag of the guy in the next room turn over in the night! You see young Porters on the trail walking with five or more massive plywood sheets on their back. They have a band of cloth that is secured to the load and then wraps round their head like a ballerina’s headband and that’s how they take the weight. Must be so heavy!

We eventually got up for egg on toast and met outside at 9am to walk to the monastery where the Xtreme Everest talk was being given. The purpose of this talk was to share the findings of the ten years of research to the Sherpa community, as they had been an integral part of the research and a number of them had been participants in the testing. It was really interesting, there was a slide show and five of the team took it in turns to talk about the different areas of research that had been investigated. It was all simplified, so that was very good for me – being a non-scientist – as I could understand what they were trying to explain.Afterwards the team were presented with cream scarves by an official from the town and we were free to look around the small museum at the monastery and enjoy the rest of our day.

We were standing around (waiting for someone to go to the loo!) and got chatting to two Americans, who had come to the monastery to find us I believe, as they were conducting some research and were looking for some additional volunteers. Of course we agreed to take part and ended up going to a very good German bakery with them, where I had a very nice apple tart waiting for my turn. These people were from the Harvard Division of Wilderness Medicine at the University of California and San Fransisco and were looking at cognitive impairment at high altitude. We had to do a series of cognitive tests and have an ultrasound of our eyeball as they were measuring the size of the optic nerve (or something around that area). We would be tested a second time when we get to Pheriche, altitude 4,200m. After that we stocked up on snacks and then I had a shower – a luxury I won’t get again until we get back here I expect!

With it being our last evening at Namche I had possibly my last game of pool on the world’s highest pool table with a Sherpa for a partner, and allowed myself an Everest beer at Club Namche, after a dangerous game of Irish snap (my middle finger is never going to be the same again after getting it caught up in a tangle of flying hands at a crucial part of the game). Tomorrow we are off to Deboche, via Tengboche, and have to walk up the second of our big hills (Namche being the first).