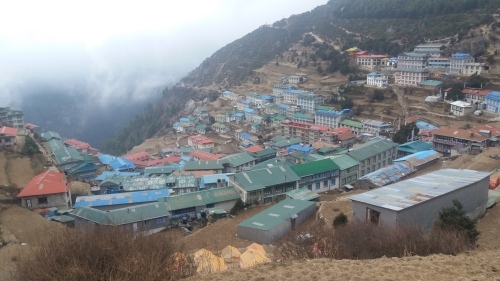 Not one to get a good nights sleep when at home, when the alarm went off at 6am I felt as if I hadn’t slept a wink – although my room mate begged to differ as apparently at some point I snored …

Breakfast was porridge, omelette and toast and we left around 8.30am to walk to Namche Bazar. The hill to Namche is legendary as it’s the biggest and longest hill on the trek and the hot and sunny weather, although fabulous, would make it harder for us as most of the trail is quite exposed. I had bought a small tube of factor 50 face sun cream, but soon realised that I might run out before the end of the trek as the sun is really hot and with the absence of clouds you have to replenish frequently. I had assumed I would be wearing my thermals under my clothes from the beginning but t-shirts seemed to be the order of the day and if this weather continues then I don’t think the thermals will come out until we are much higher.

We took it steady and made it to Namche without too much exertion, I’m not sure what the fuss is about! I was determined to make it as the highest pool table in the world was waiting for me, so every time we rounded a bend and saw yet more steps I kept the thought in my head of drinking a cold beer and me thrashing the locals (well, I’m allowed to daydream, right?) so the journey went fairly quickly. The good news was that we made it to Namche in a fairly good time, the bad news was that our lodge was at the very top of the town, so after making it up the hill we then had to climb another 300m of winding steps … I have to admit, this was a bit of a killer and by the time we got there we were hanging out for a hot lemon and lunch. After lunch I sat outside in the sun with an earl grey tea (a rooibos one I had bought with me from the UK) and wrote some blog, it was very civilised. We had been warned that there would be an absence of showers on the trek, however this was a fairly luxurious lodge (Amanda and I were lucky enough to have a room with a toilet) and a hot shower was available – at a cost of Rs400 (US$4). I availed myself of the facilities and felt like a new woman.

Namche Bazar is a pretty town, it is perched in a horseshoe shaped cut on the side of the mountain and the buildings are layered on levels like a rice field. They are all built in the same style, more rectangle than square, a couple of stories high, and have tin roofs that are blue, green or red. Our lodge is called the Hotel Sherwi Khangba and Xtreme Everest have used it for previous trips. It is owned by a man called Lakpa Sonam who is an amazing photographer, and many of his photos are up in the lodge (and are also available for purchase). He has also put together a photography exhibition and there is a small museum which I must make time to see. As my afternoon had been taken up with various activities I didn’t get time to go into town, so Amanda and I made some plans for the following day. There was plenty of time as we had 4 nights in Namche.

Dinner was soup with popcorn for starters, and potatoes, veg and spaghetti for main – it appears that in Nepal I’ll be mostly eating potatoes, pasta and veg – plus dhal bhat!

The cards came out after dinner and I joined in with the boys again. I taught them a game my family calls Woofie, but they renamed it ‘Mooney’. As the game is fairly simple we started to add rules that complicated things and this game was called ‘Xtreme Mooney’. It ended up being a lot of fun and we laughed a lot. A good end to a tiring day.