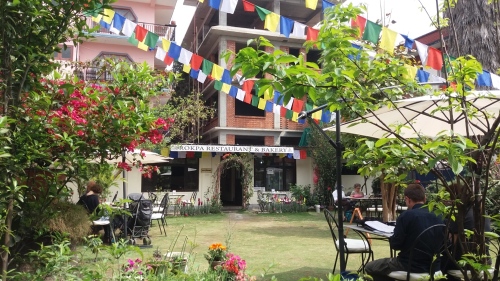 Woke up early again and packed before breakfast, and had my last scrambled egg, toast and sautéed potatoes at Rokpa. Went out to change some money and wander round the stupa one last time and then said my goodbyes to the older man, Shiva, who worked there and I had got friendly with. I was quite sad to leave Rokpa, it was a pretty place with the courtyard garden and flowers, prayer flags overhead and peaceful surroundings. When you feel comfortable and safe in a place it’s sometimes hard to move on.

As it was a Saturday, and a public holiday, the traffic was light and we made it to the Summit Hotel by 12noon. The majority of the group were on a flight from London and wouldn’t arrive until late afternoon so I thought I’d sort out all my kit before my room mate arrived. The Summit Hotel is very nice, with a pool, fitness room and pretty places to sit. I went to the bar for lunch and bumped into Kay and Sarah. Kay is my expedition leader (there are three groups) and Sarah is the ‘runner’, but actually works really hard doing the admin and organising for the scientists and the laboratory. Yes! They have set up a lab at the hotel where we will do our base tests for the research before we leave for the mountains.

After lunch they had work to do so I went to the pool to relax. There are some families here – a man called Mike is the overall research project leader and he is here with his wife Denny, who is the chief medical officer, and their three kids. It was one of their kid’s birthdays (I think he was 8) so there was a little party in the afternoon with cake! Very nice 🙂

There is another couple with two girls and all the families are going on a trek but starting in a different place and only going as far as Namche Bazar (where we stop for four nights). The youngest is 2 years old, I think it’s great that they are giving their children this opportunity at such an early age to travel and experience the world. I know that not everyone is in a position to take their children to Nepal for example, but I think parents should expose their children to foreign experiences from an early age so that they are not scared of the world and learn about different cultures etc. My parents couldn’t take me further than France/Spain because we couldn’t afford it, so as a result when I did my backpacking it was very overwhelming. Everyone does things at their own pace and as and when finances allow, and I’m not in any way criticising my parents, but if I ever have a family I’m going to try my best to give them as many experiences as possible.

As the party was finishing it started to rain, and this turned into a major thunderstorm with lightening and pretty impressive thunder. This delayed the plane so our intrepid travellers arrived around 6pm. There was a little welcoming ceremony, where we had to line up and accept a bindi on our foreheads (a blessing), a garland of orange marigolds, a boiled egg (I didn’t find out what the significance of this was – I’ll make some enquiries!) and a little shot of a liqueur. It was nice to see everyone I’d met in Sheffield and meet up with my roommate, Amanda.

There was a briefing at 7pm, which was quite exciting as they talked about the experiments we would be taking part in. We had to sign some consent forms and would need to report to the lab at 7am tomorrow morning! I’ll talk about the tests tomorrow when I find out what happens! There was a BBQ afterwards and we went to bed around 10pm (as Amanda was knackered and I thought an early night might do me good).